Activism within Curation: Complicating the National Narrative with Kathryn Bridge

As social beings, we inherit more than just eye colour and hair type, but also the gains and sorrows of our ancestors. The Royal British Columbia Museum’s “Family: Bonds and Belonging” exhibit tells the story of Canadian history in relation to families. These are the histories that affect each and every life. The focus on family personalizes history. The exhibit forces us to confront the fact the people in history books were real people: they had brothers, neighbours, mothers, teammates, and godfathers. They weren’t simply anonymous actors and subjects. Walking through the exhibit, we see their names, faces, toys, and clothing and hear their voices. The exhibit demands a greater empathy for the past and present injustices in Canada. It reflects an important direction in which museum curation is moving. 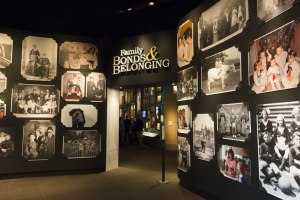 The Royal BC Museum is responsible for complex storytelling. Victoria is a popular destination for people seeking a taste of Canada, but with tolerable weather and a novel aesthetic of colonial quaintness. Given Victoria’s destination status, the museum shoulders a burden as storyteller that is greater than most other provincial museums. The Royal BC Museum is responsible for telling the city and province’s history alongside the nation’s. These stories cross when convenient and flattering, but are also conjoined for terrible moments. Victoria was a part of the Commonwealth games, just the same as Victoria was a part of the internment and dispossession of Japanese Canadians. These difficult legacies (and contemporary complicities) are often excluded from Victoria’s self-depictions, but they are true nonetheless.

Benedict Anderson, who conceives of the nation as an imagined community, tells us that the nation postures itself as a horizontal fraternity, wherein nationalism is disseminated through spectacle and print. Museums, historically, have been integral to projects of nation building. Is it possible, then, within an institution like the Royal BC Museum, which shares these ideological roots, to disturb colonial nationalism?

Enter Kathryn Bridge, former curator at the Royal BC Museum, my boss, and someone whose work I think serves as an excellent example of weaving activism into professional curation. This summer I had the opportunity to talk to her about her experience in curation, with particular attention the newest exhibit, “Families: Bonds and Belonging,” an innovative and dynamic response to the fanfare of Canada 150 that highlights marginalized narratives.

Kathryn is a curator of history and art. Her work includes research based on the collections, acquiring new material for the collections, interpreting and facilitating access to the collections, and designing new exhibitions. She is also a researcher and scholar, and disseminates her research through exhibitions, publications, web galleries, and public events. She holds an undergraduate degree in Art History, and a Master’s and PhD in History. She began, simply enough, with a summer job, taking an inventory of the historical paintings, drawings, and prints collection in the archives. This eventually led into a full-time position as an archivist, during which she continued her education. This progressed through different roles, then into management, and finally to the hands-on role of curator.

First and foremost, I was interested in the Families exhibit because it was Kathryn’s last project at the Royal BC Museum before retiring. Because of this, it holds dual importance. First, it is the conclusion of her career, a chance to synthesize that which she has learned over a lifetime of curation and activism. Second, and obviously, the Families exhibit is a fascinating example of agile and unorthodox storytelling. It complicates the usual museum narrative, in that it is not linear, there is no particular paradox, and it is the effort of a community.

The exhibit examines the family in an intentionally broad sense. It emphasizes that families are created through not only blood, but also through friendship, association, and space. We see more than the nuclear family, as the exhibit aims to represent as many gender identities, sexual orientations, and ethnicities as possible. Lineage is more than DNA, and thus is never static.

The exhibit aims to reflect the living, breathing, growing realities of today’s Canadian families with interactive features. You can listen to others tell their stories of their favourite family meals and holidays or even record your own. Highlights of the exhibit feature people and themes from the city and province alike. The University of Victoria’s Dr. Aaron Devor’s wedding heirlooms, for instance, lay aside Her Honour Judith Guichon’s family saddle. These are bracketed by a children’s pillow fort, and a handful of funeral practices. And in the centre, the most startling of all, are garments – displayed on mannequins made uniquely for the fabric. It is a stunning example of the Royal BC Museum allowing the exhibit to transcend the protocol of museum curation. The clothing predates the mannequin, and is therefore given greater gravity. The giant pillow fort along with the 70s rec room-style space projecting old home videos gives a sense of comfort and home. The task of accurately representing these difficult histories is made easier with the balance of these intentional safe spaces. 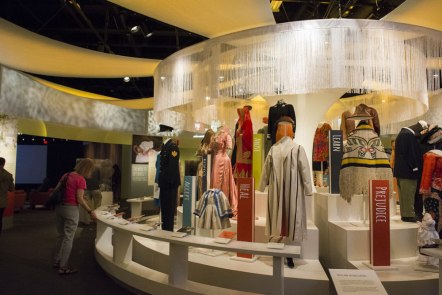 The Families exhibit started as an idea from the CEO, Jack Lohman, and grew into a product of intense collaboration between history curators, community members, the museum team, and local educators and designers. This was one of the first curatorial teams that was “open,” in the sense that the exhibit demanded community involvement unlike any other. Because of this community involvement, the exhibit was a unique opportunity to not only destabilize the typical story of a family, but also a museum.

This destabilization is tangible within the halls of the gallery. Sidestepping a tendency to disproportionately tell the stories of the privileged, the Families exhibit tried to build into its structure a more honest narrative and intentional safe spaces. This is what makes it so dynamic – and unorthodox – to experience. In just a few rooms, there are dozens of families and their heirlooms, strung like treasures into a busy but beautiful necklace. The intentional broadening of narrative can seem like a creative move, but it can also be considered a challenge to the colonial past and present of government institutions. In demanding that the space tell bigger and more interesting, complicated stories, the future is refusing to consume that which preceded it: the settler, the colonial, the unapologetically imperial. This does not assure that no such atrocities will be replicated, but does certainly make efforts to be better.

If museums are the places in which the people go to see themselves or others, it stands that the museum is the place where community also goes to imagine. Typically, a museum is spectacle, frozen and analyzed. It is the parade and the prose that Benedict Anderson was gesturing towards, the halls in which people go to look at what was preserved, and where they perhaps anticipate the future. So if the museum is discussing systemic inequalities, institutionalized racism, and the construction of the nuclear family in relation to colonial nationalism, it does stand to reason that it demands its guests to consider such things, not only within their visit to the museum, but also within their own lives and landscapes. This affects citizens of Victoria and visitors alike, as settlers, stewards, or witnesses of the land.

The responsibility of the curator is grave, complicated, and exciting. Kathryn is a thoughtful and agile curator, whose career finished in an impossibly vivid task – to showcase the family. And with family, comes everything that family is: messy, noisy, unkind, full of hierarchies, traditions, laden with cultures, heavy with atrocities and wild with love. As this exhibit plays out in Canada’s 150th year, we are able to see some parallels between the complex realities of a family and that of our nation. And as families are the fabric of Canada itself, it is only fair that we subject both to intense scrutiny as well as hopeful discussion. This exhibit, when examined for the ways in which it disturbs all that I outlined above, does well. The responsibilities of the curator and community are laid bare, and are called to face the task of telling bigger stories.

The S+A Forum is an initiative of the Landscapes of Injustice Research Assistant Committee. We are undergraduate and graduate students from eight leading universities across Canada who specialize in history, law, public policy, critical geography, and cultural resource management.

Connect with the S+A Forum

During the 1940s, Canada enacted mass displacement and dispossession of people on racial grounds, a collective moral failure that remains only partially addressed. Landscapes of Injustice is a multidisciplinary research project dedicated to recovering and grappling with this difficult past.

Connect with Landscapes of Injustice